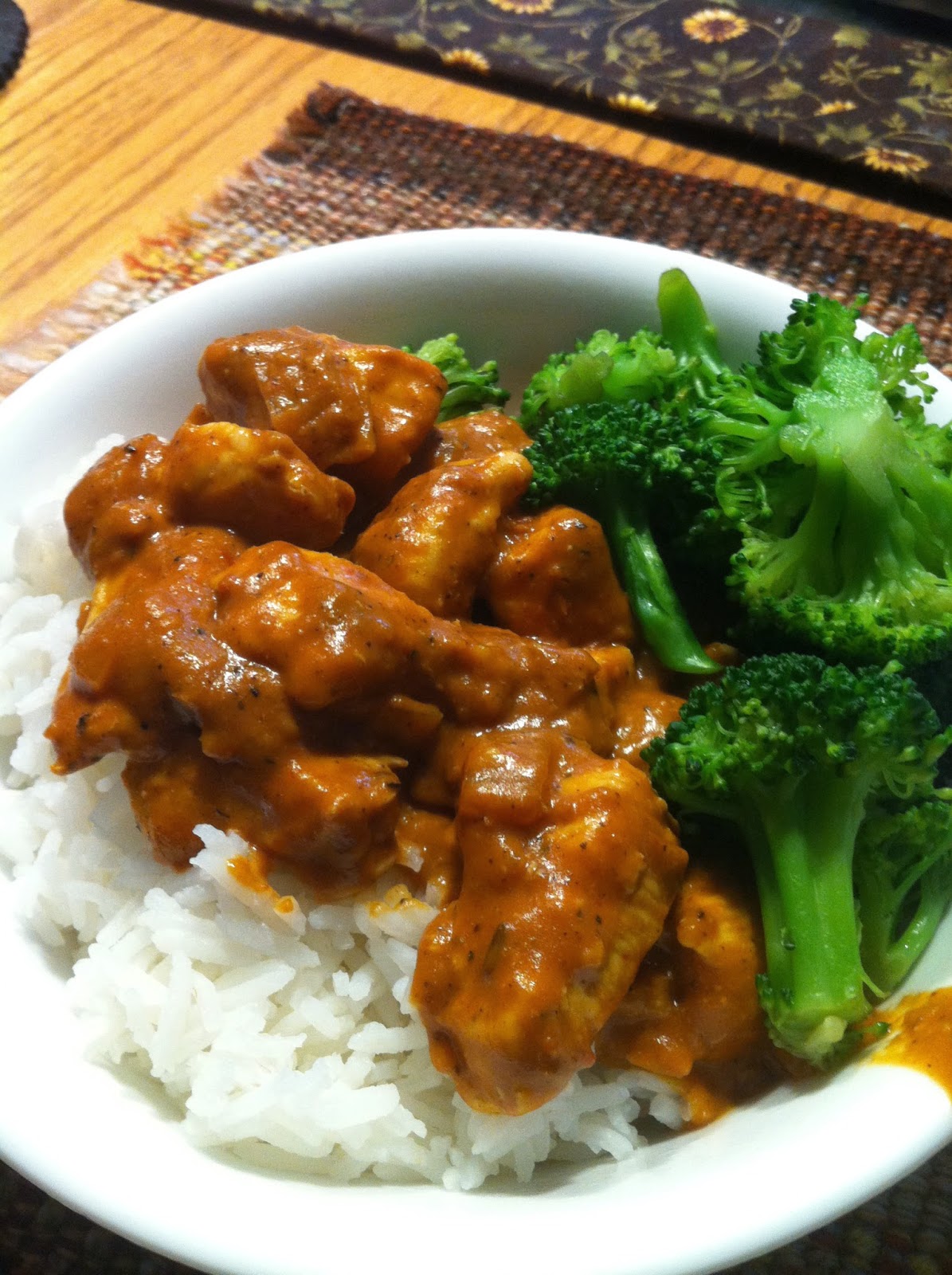 Recipe from Damn Delicious, & my very modified garam masala is from All Recipes.

~Cook rice according to package instructions
~Saute onion and garlic in oil until translucent.
~Stir in coconut milk, tomato paste, flour & spices.
~Stir until there are no lumps and sauce starts to thicken.
~Simmer sauce.
~Cook chicken in a separate frying pan.
~Once chicken is cooked, add into sauce and stir to coat.
~Serve chicken and sauce over rice. 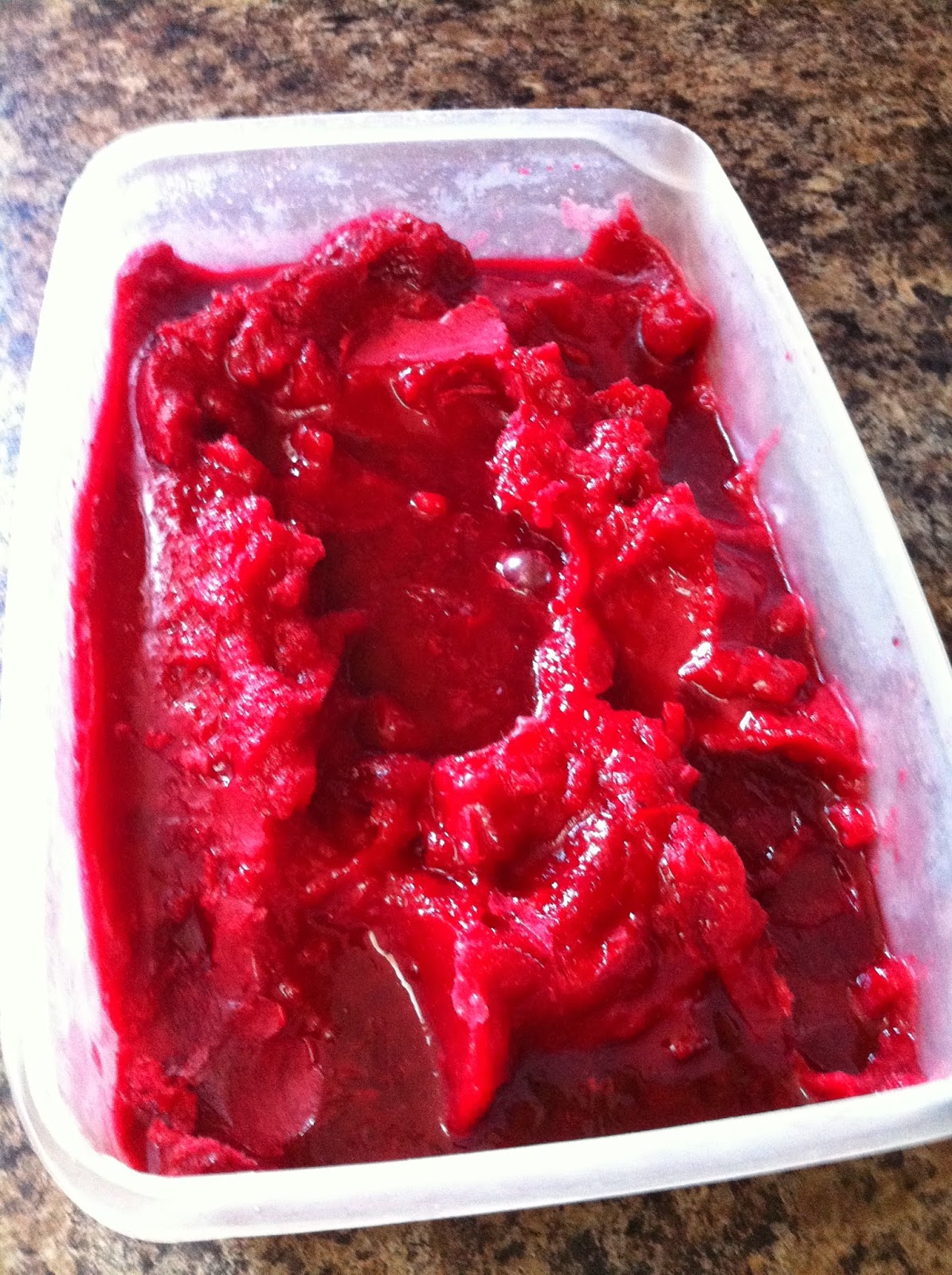 This had so, so, so much flavour and I don't think there's anything more to say about this other than that.

~In a medium saucepan, combine water and sugar, and heat until sugar dissolves.
~Add in berries and cook until rendered down.
~Push mixture through a fine sieve, saving the juice and discarding the seeds and pulp.
~Chill mixture (I sped this up by placing in freezer for ~1.5 hrs).
~Proceed according to ice cream maker instructions.

Enjoy! So delicious and fresh! 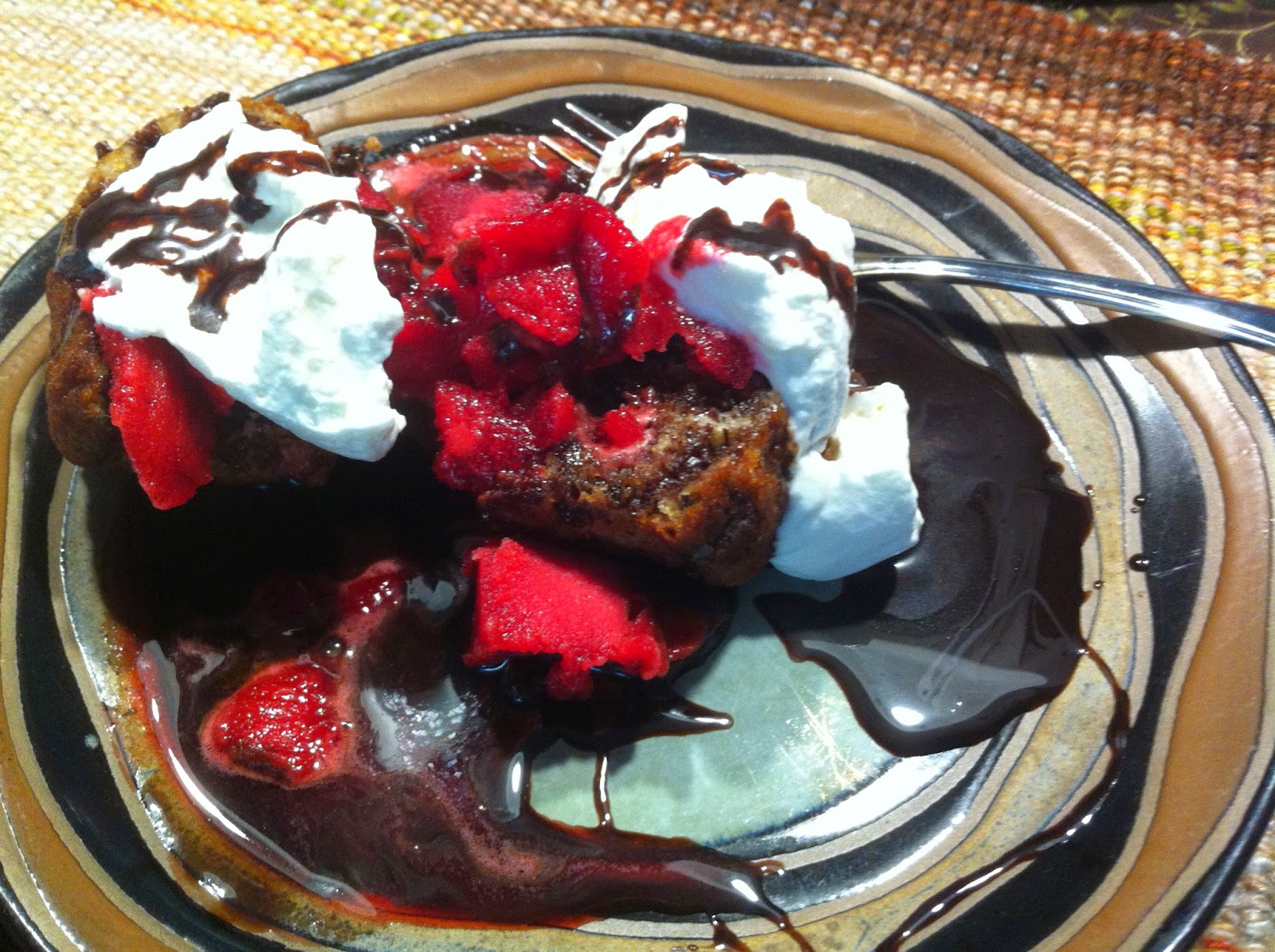 Now this picture doesn't really do this justice. Banana Chocolate Chip Muffins, topped with this sorbet, some fresh whipped cream and chocolate sauce (can be found in here)
No comments: 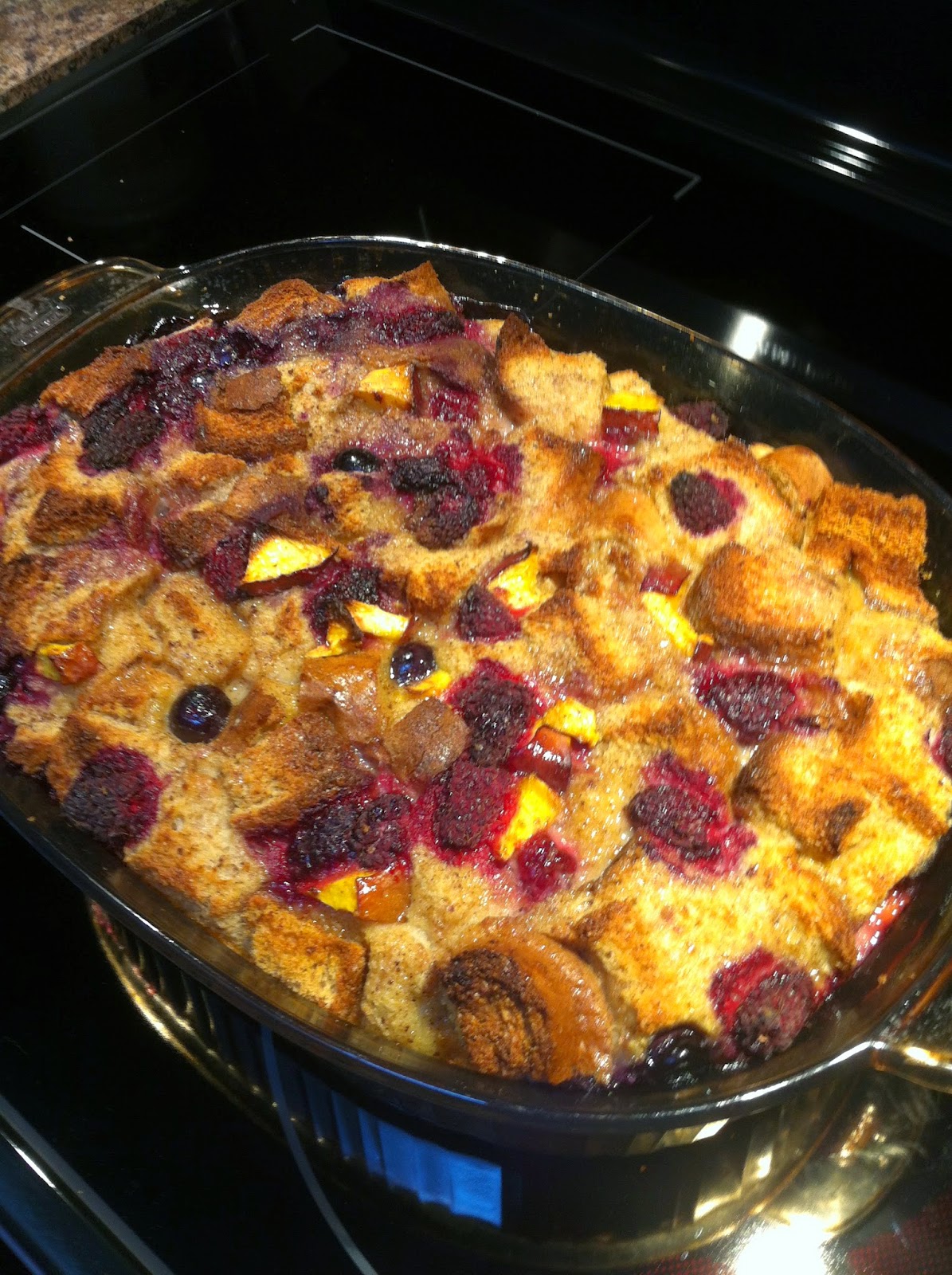 The place I got this recipe from called it bread pudding and stated they served it for dessert. I wanted french toast however and the recipe looked no different than what ingredients would go into an overnight french toast casserole, so it became breakfast.

We had a surplus of blackberry-like berries and so I had a day of figuring out ways to use them up. This was the first method of the day and it turned out pretty great. I did increase the fruit and decrease the sugar content however. I was expecting to need to put some butter or maple syrup over the top of it, but it was absolutely unnecessary. The only problem was because it needed to be dairy free, I had to use soy milk/almond milk instead of cream / half and half. It wasn't a big deal, but there was just a little bit extra liquid that sat in the bottom because it wasn't as thick of a custard. With the leftovers we just scooped the bread out of the excess moisture, put it in a container and microwaved it the next day and it was great. Not soggy at all.

If you don't want to go dairy free / low fat, check out the original recipe at A Spicy Perspective. Otherwise, just substitute any milk / cream product to a total of five cups. So skim milk, coconut milk, whole milk, whatever works for you.

After eating this, I got to thinking and as great as this was, I tend to have a surplus of sweet breakfast recipes in my arsenal, simply because while I love bacon and fried potatoes, etc. I hate eggs. Omelettes, bennies, scrambled, I can't do it if it's an egg dish. French toast on the other hand, while it has eggs, it is baked into bread, so is more liked a baked good and there is no resemblance to egginess.

So this thinking resulted in me thinking up what I'm going to do next with this recipe. Savoury bread pudding! Some green peppers, onions, mushrooms, maybe some ham or bacon crumbled in and omit the vanilla / cinnamon / nutmeg and replace it with some italian seasonings or poultry seasonings. The poultry would make it very much like my Mom's stuffing however. So we'll see how it goes.

A couple of hints with this recipe though, the recipe I found called for good quality, bakery bread. This was a spur of the moment thing though and I only had two half loaves of sandwich bread in the freezer and it worked just fine. It was even good that it was frozen, because the fluffiness can make it hard to cube, and cutting it frozen worked great.

Also, as for the sugar, I'm thinking it might be good to divide the sugar up and do 1 C. white, 3/4 C. brown or some combo like that. Just to try it out for next time.

Final also...while this may fit in a 9x13 baking dish, I have a bigger casserole dish that I used. It's not as long or wide as it's kind of oval shaped, but it's deeper and it worked well for this. I don't know the exact volume of it, but I just use it when I'm concerned that something might puff up in a 9x13 and spill out.

~Preheat oven to 350 F
~Place bread, fruit and berries into baking dish and toss to evenly distribute
~Combine the rest of the ingredients in a separate bowl and whisk until frothy.
~Pour mixture over bread and fruit
~Bake for 1 hr, 15 min. Centre may still look moist, but not soggy
~Let stand for 10 min. 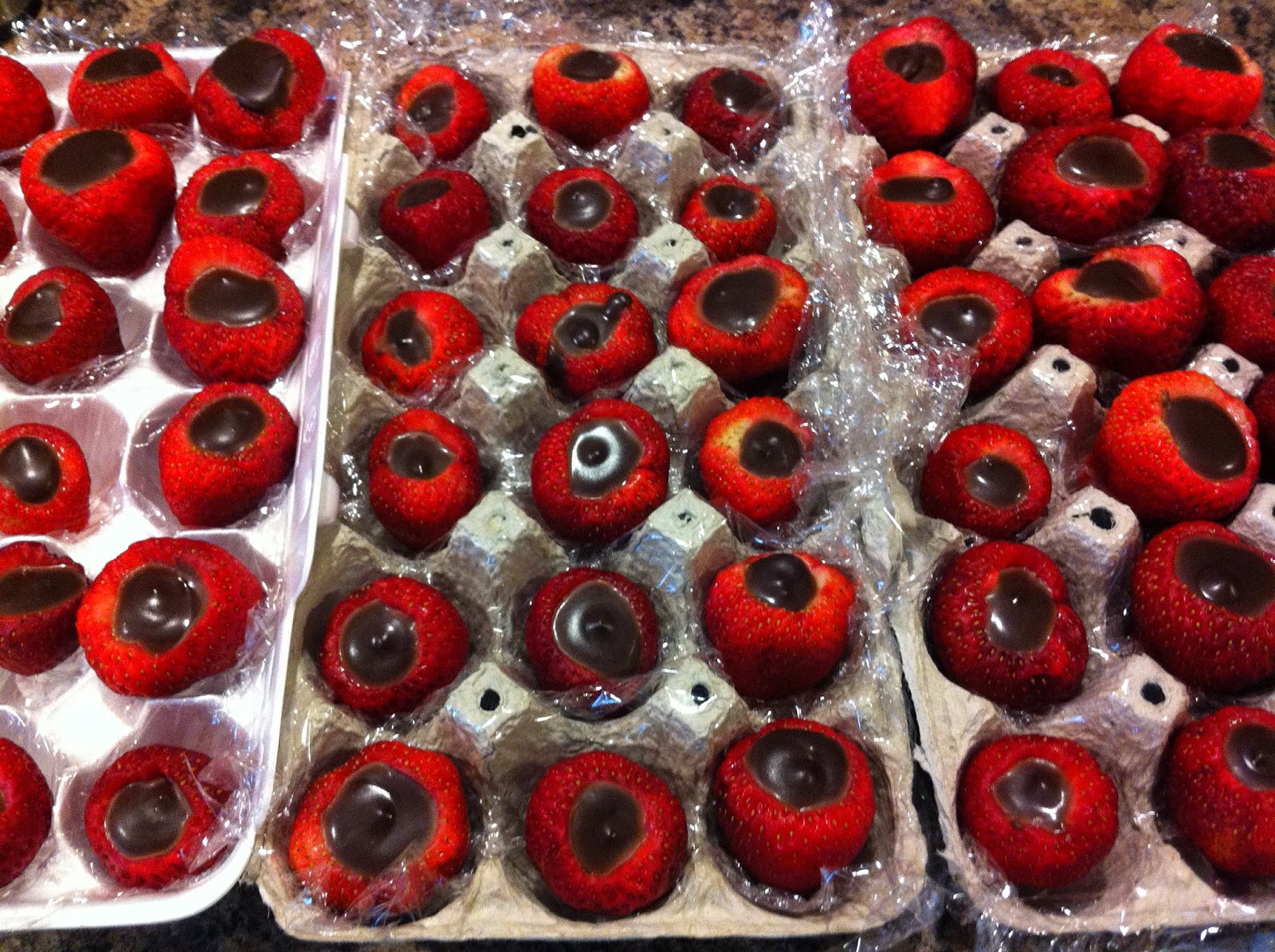 Well, I feel like a broken record saying this yet again, but our oven broke AGAIN! They are just such useless junk. In under a year and a half, we've had SIX ovens rotate through our kitchen (and four dishwashers but that's a story for another day). Anyway, in between number five which was the one we'd had for maybe 16-17 months (and it never worked properly from day one, I might add), and it blowing up, and number six (the loaner from the appliance store while they put on every imaginable brake so they could delay fixing the oven for the 3rd time), I had to take something for a potluck. Unfortunately, unlike the last stretch of 5-6 months without an oven, it was just that, no oven. We still had a functioning stove top. This time however it fried everything and nothing would work. So long story short, I guess technically now we've had seven ovens move into the kitchen (they finally fixed ours and it's back) and these strawberries are amazing. Which is really all anybody cares about right?

I was originally going to do chocolate dipped strawberries. Then I saw a Pinterest post on how they did reverse chocolate strawberries, where they filled the inside with the chocolate. One thing lead to another and I eventually saw truffle stuffed strawberries on some google treasure hunt. So I used my go-to truffle / ganache recipe that I discovered last Xmas (I don't think I've posted it yet but that's probably because there is most definitely a story to go with that one, and I've been lacking enough time lately to do it justice). Until that time however, the recipe is a slight modification on Anna Olson's Truffles.

Standing each berry up in a plastic wrap lined egg carton was the easiest way to fill these when the ganache was still liquidy. Just spoon it into a piping bag and pipe away. Once it's set though, we just took a spoon and scooped out the hardened truffle and crammed it in (with force) into the hollowed out berry. This way wasn't as pretty, but by that point it was my leftovers and I wasn't presenting them to anybody but myself.

One warning, I made these the night before and then day of had them sit out of the fridge for a couple of hours in a fairly warm room. The juice from the strawberries and the cream created a brown juice that pooled in the bottom of the egg cartons and while they hadn't turned or tasted off in any way, it just wasn't as pretty looking.

On a side note, to provide some contrast I also had some raspberries. In the centre of each one I'd inserted a single chocolate chip upside down (pointed side sticking into the berry) and they looked lke mini versions of these strawberries.

~Finely chop chocolate and place in a medium glass bowl
~Heat cream until it just begins to boil.
~Pour cream over chocolate and stir until it melts and is combined
~Allow to cool slightly, while you hull and wash the strawberries
~Line egg cartons with plastic wrap
~Pat strawberries dry and place one in each hole in the egg carton
~Using a piping bag, pipe ganache into each strawberry
~Place in fridge to set 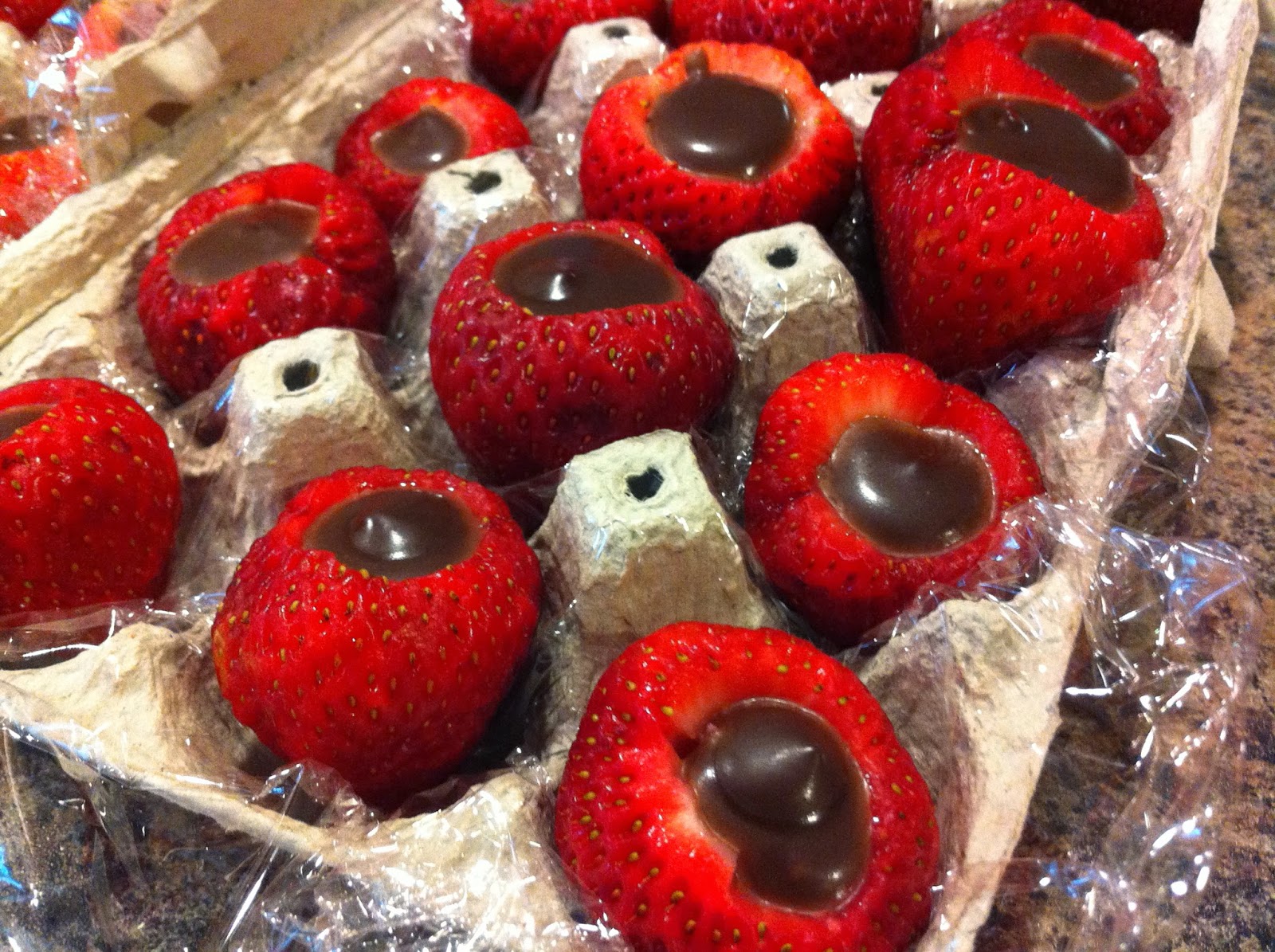