Now there is a story with this one. I always have a dilemma when it comes to ice tea. I hate tea, but I love ice tea. Being Canadian, our ice tea comes in jugs from the pop aisle and is only lacking carbonation to fit into that home. It's overly sweetened with (what I'm assuming to be) high fructose corn syrup, artificially flavoured and probably loaded with a long list of ingredients that lacks the obvious ingredient, tea! Which is why I like it obviously. In the past few years there has been some changes. I have been maliciously fooled in a couple of fancy coffee shops when I ordered an ice tea and was very disgusted to taste what was handed over to me, because did I mention, I hate tea and they had just handed me a cup with tea and ice cubes in it. Eww.

My problems follow me on the occasional trip I take south of the 49th. Again, automatically when I walk into a restaurant I order an ice tea out of habit and only as the first sip is occurring does it suddenly hit me that American ice tea is exactly what I hate, iced tea.

So ladies and gentleman, you might be asking why in the world I would be posting a recipe for ice tea then when I so clearly hate anything that is not the artificial junk in the pop aisle? Well, the answer is simple, I have found the answer to all of my problems.

And that is two words, the South. While in many ways we are very different from the southern United States, there are also many things that I find we have in common. For years I had heard again and again about the religion of sweet tea in my favourite country songs and I never put two and two together. While Canadian ice tea is definitely sweet, in no way has anybody ever considered calling it sweet tea, but that is exactly what it is. (Side note, a couple of months ago I saw for the very first time, the artificial ice tea that we love actually labelled and marketed as sweet tea. I mean seriously, this would have saved me years of heartbreak). Anyway. The point I'm getting at is that after all this time of people telling me to make a pot of tea and chill it, I finally figured out how to make ice tea that I'll actually drink. When I finally clued in that the northern US states like their tea unsweetened versus the sweetened southern version, and every time I go south (to the northern states) I hate how unsweet their tea is, I finally realized that here we drink sweet tea. I mean who knew right? So I googled a couple of sweet tea recipes, but was tentative about trying them out because nothing with real tea bags that I'd ever tried before was half decent.

So what changed? One of the people I work with is like me and says she hates tea. I work with a staff that loves their tea though, so we're the odd ones out. Well, one day out of the blue she casually stated she had this new obsession. She gave me the recipe and the rest is history (or at least 2 batches a week for the last month). I added the baking soda because it seemed to be the 'secret ingredient' in all the southern recipes I found, and I increased the lemon juice but that's it for changes.

And that's my story, now time for the recipe.

~Steep tea in boiled water for 1 hour
~Remove tea bags
~Stir in sugar until dissolved
~Top up with cold water & lemon juice
~Stir
~Chill
~Serve with ice (we like to fill the glass 80% tea, 20% lemonade) 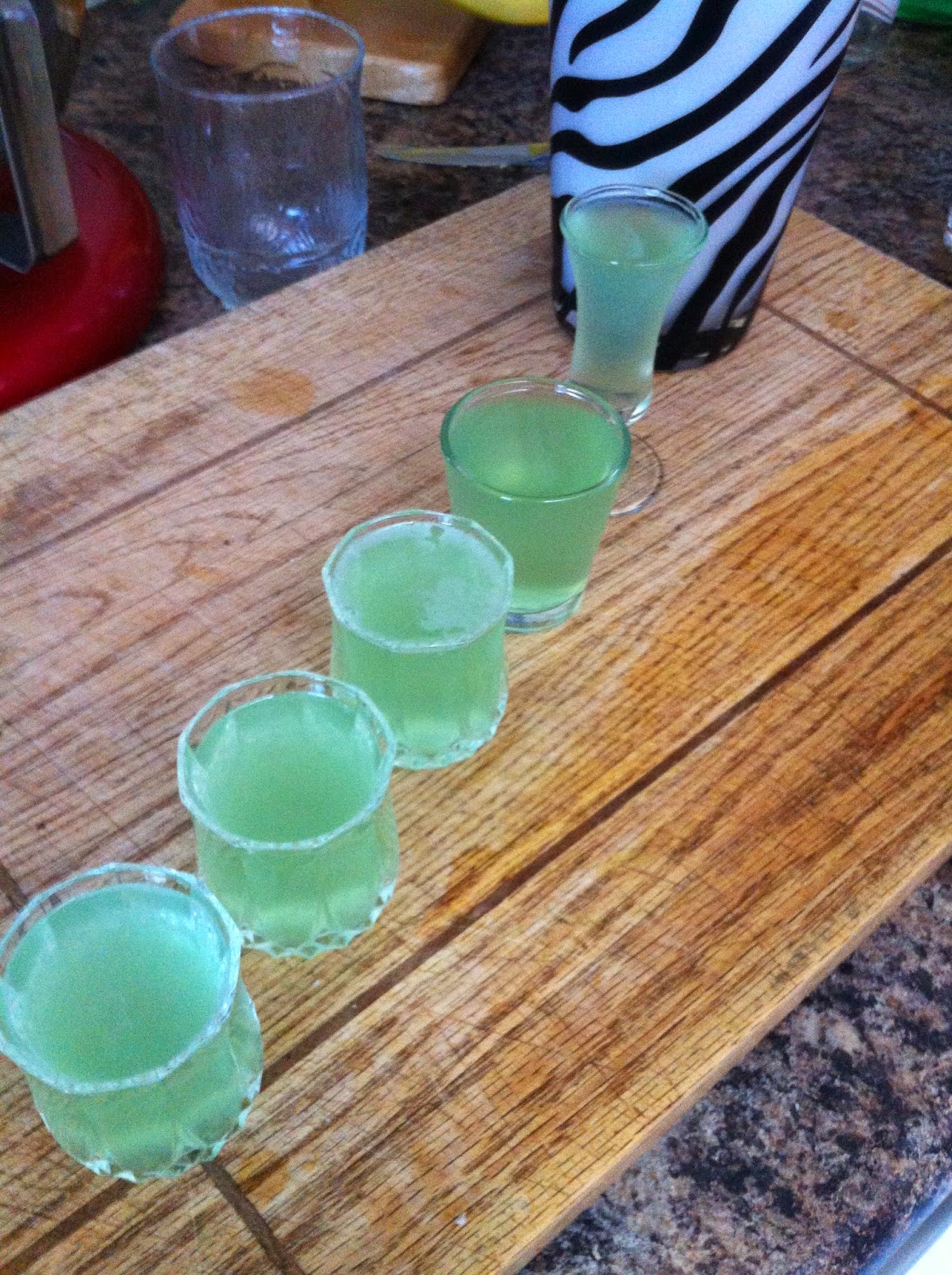 I tried one of these several years ago on a whim and was very impressed for a couple of reasons. 1) The drink was electric green, 2) It's namesake was my absolute favourite character growing up, & 3) It tasted great.

While this recipe isn't identical to that original one, it still is green and tasty so what more can we really ask for? While this is a shot, I'm not opposed to fiddling with it in the future to make it into more of a cocktail size for sipping.

When you look up the recipe for this shot, there are many different ways to make it. Most of which have you adding a splash of half and half, milk or whip cream into or onto the top of the shot. I'm 90% sure that the one I tried was not creamy, but I've not actually tried making this one with the dairy in to compare, so I can't be certain. But this still tastes pretty good without it and I must say, it seems less strange to omit cream from a fruity drink.

Recipe from the Tipsy Bartender

~Combine all ingredients with ice in a shaker.
~Shake
~Strain into shot glasses