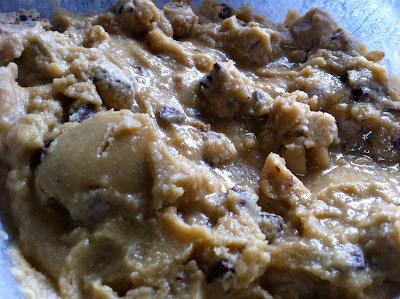 A couple of months ago I finally got my ice cream maker that had been the reason why I bought my KitchenAid in the first place. Unfortunately, my first attempt at making ice cream went horribly wrong, and it was not the machines fault in the slightest. Instead of following the written recipe, I substituted out the heavy cream / half-and-half / 2% milk for plain old almond milk. Then on top of making ice milk instead of ice cream, I also added in almond extract. Now my experience with this flavour of extract is very limited. I'm typically a vanilla fan (and by that I mean I always increase the amount that the recipe calls for by 50-100% usually), but I decided to give the almond a go this time. Unfortunately, I didn't realize how strong this extract was and I may have put a slight bit too much in (and by slight I mean way, way, way too much). Yup, it was awful, and so I stayed clear of the ice cream maker until today.

Today I decided to do it right though. I made a custard base, whereas last time the recipe I used boasted that it didn't require a custard base (so I thought 'oh great it's healthier because there's no egg yolks'), and I used a combination of almond milk and soy milk just because. The original recipe called for 2 cups heavy cream and 1 1/2 cups whole milk. I used 2 cups almond milk (vanilla) and 1 1/2 cups low fat vanilla soy milk (full fat would probably be better but I used what I had). While this means that the ice cream isn't as creamy as it should be, I did it so the lactose intolerant in the house could enjoy this ice cream. Another note, I subed out the heavy cream called for in the cookie dough recipe for the same low fat vanilla soy milk. I think next time I'll get the regular vanilla soy milk and use 3 1/2 cups of that and completely eliminate the almond milk in an attempt to get this ice cream a little less icey.

The neat thing (yes I did just say neat) about this ice cream base is that it actually tastes like chocolate chip cookies. It's not just some vanilla or chocolate ice cream with cookie pieces in it. It is truly a double chocolate chip cookie ice cream. And it is absolutely AMAZING! Actually it's beyond what even my wildest imagination could have suspected it would be. And the smell when it was cooking in the sauce pan = heaven. This will definitely be a make-again. But as more a note to myself, don't use all the cookie dough balls in the ice cream. Save a few for later, eat a few now, I don't really care, but I put them all in and it was a little too much dough and not enough ice cream (seeing as the ice cream is so good). I'd suggest about 3/4 of the dough should be used.

After making this, I do realize why Ben & Jerry's is $7 for a small, small container. It's a heck of a lot of work to make ice cream.

I adapted the ice cream recipe from Annie's Eats and the cookie dough recipe from Brown Eyed Baker. 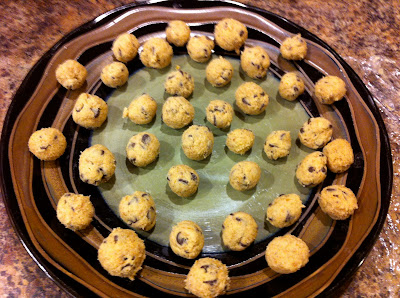 For the Ice Cream:

For the Ice Cream
~In a medium sized bowl, combine the egg yolks and brown sugar and whisk well to dissolve the sugar.
~In a medium sauce pan, melt the butter and continue to heat (stirring continuously) until the butter browns.
~Whisk in the almond milk and heat mixture until it begins to simmer.
~Add a small amount of the hot cream mixture into the yolk bowl and whisk to combine. Add in the remaining cream mixture and whisk.
~Pour the mixture back into the sauce pan and heat until it begins to froth and boil (temperature reaches 170-175 F on a thermometer).
~Transfer the mixture back to the bowl, running through a fine sieve first.
~Add in the soy milk and vanilla. Mix.
~Place mixture in the fridge to cool. (At least 3 hours). Proceed with making the cookie dough.
~When the mixture has cooled thoroughly, transfer to ice cream maker and mix according to manufacturer's instructions.
~As ice cream is churning, roll cookie dough into bit sized balls.
~Add in the cookie dough balls and chocolate chunks in the last couple of minutes of mixing or after mixing is done (depending on your machine - For the KA I found it best to add in after the mixing was done to keep the cookie dough as balls and not have them squashed to pieces by the mix attachment).
~Place ice cream in the freezer to set (about 2-4 hours).

For the Cookie Dough
~As the ice cream base is cooling in the fridge, combine butter and sugars in the bowl of an electric mixer and cream until well combined.
~Add in the soy milk, vanilla and salt and mix well.
~Pour the flour in and mix again until well incorporated.
~Finally add in the chocolate chips and mix until evenly distributed.
~Cool dough in refrigerator until ice cream is churning.
~While ice cream is churning, remove the dough from fridge and roll into bite sized balls. Return to fridge to keep cool until ready to incorporate into ice cream. 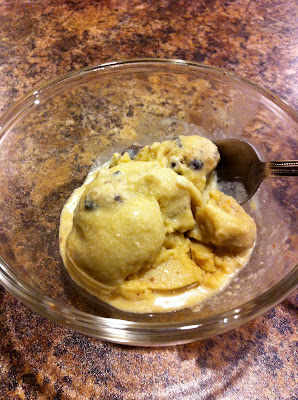